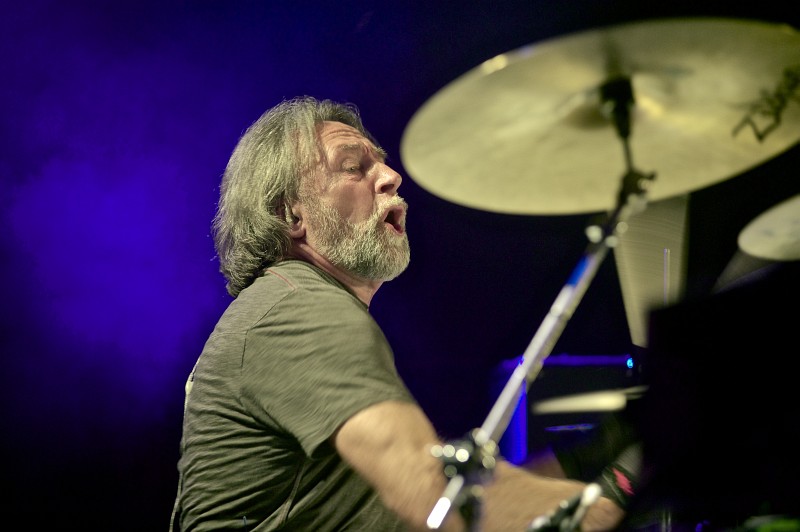 You can’t mistake Jerzy Piotrowski for any other drummer. The musician born in the mountain area has a Highlander’s perseverance, which had him practice for hours on end and permanently keep improving his craft. Since the 70’s he has been enchanting listeners with the unique progressive precision of Billy Cobham and Bill Bruford.

Since 1971 he has been the member of the most renowned Polish rock band of all times appreciated by critics and fans alike all over the world: SBB. Together with the group he recorded over a dozen records and performed in innumerable concerts. The musicians shared the stage with such stars as Bob Marley (they performed after him in Roskilde ’78 festival), Jack Bruce, Mahavishnu Orchestra, Soft Machine, Colosseum II or Charles Mingus. In Budapest they were able to attract a dozen-thousand-strong audience during the open-air performances in Budai Ifjusagi Park. In Poland their audiences filled the largest concert halls to the last seat giving their performances even four times a day. After suspending the activities of the SBB in 1980 Jerzy Piotrowski began working with many popular artists. With the synth-pop Kombi band he toured nearly the whole world, with the blues-rock Dżem they filled the largest concert halls in Poland. He tried his hand at jazz, fusion and acoustic music. He trained the aspiring young during percussion workshop sessions and wrote a “School for the drums” book.

In 2014 he came back to performances with the SBB. The reactivated band has already given a number of concerts, mostly sold out, very well received by the audiences and the press. They also appeared with a symphonic orchestra presenting new, more elaborate versions of the most popular compositions from the 70’s. Their plans include further concerts and absolutely premiere, studio material. With the strong as never before perfect beat of Jerzy Piotrowski.